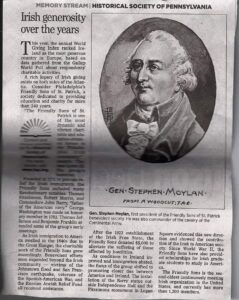 General Moylan had a distinguished career in the American Revolution. But it wasn’t his sword that kept him in the history books. It was his way with words. For Stephen Moylan, an aide-de-camp to George Washington, gets credit as the first to write the words, “United States of America.” Click HERE to read more. Click HERE for a detailed bio about General Moylan.

His letter regarding the Battle of Princeton just sold at auction as one of the finest accounts of the battle in history. He said in his letter ending his letter about the victory of Princeton:

“It was glorious, the consequences must be great. America will, by God it must be free.” 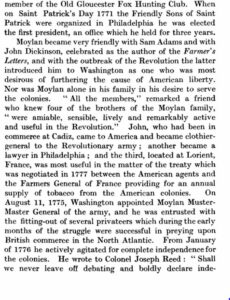 Click HERE for article about how General Moylan worked for independence. The Society is also mentioned in this article.